I still had the Piedmontese capital in my mind; the monarchic city with its piazzas inhabited by scientists and kings, by politicians and by warriors motionless in tired and solemn poses on their pedestals of stone, I still had in mind all of the strange lyricism of its fateful geometric construction.
—Giorgio de Chirico 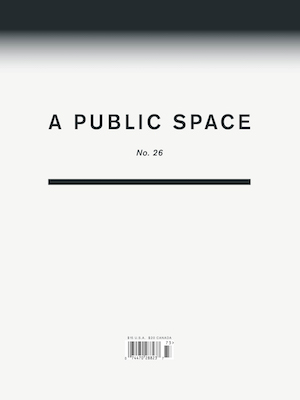 Do Not Let Mother Dear Find Us

Here I was, holding on to my attentiveness.

The suburbs of the avant-city appeared to me suddenly speckled with singing colors, papered with charming surprises.

Translated from the Italian by Stefania Heim

Our Experience of Being Alive and Having to Breathe

Temple of Hercules on the Citadel Mountain in Amman, Jordan, 2012

"Bodies are difficult," said the woman when the child finally slipped inside the dream.

Translated from the Portuguese by Margaret Jull Costa

Exile had a way of provoking contempt. One lived far away because one couldn't live inside.

Translated from the Spanish by Suzanne Jill Levine

A cheerful optimism and an expanding economy have fostered the idea that technology can be harnessed to overcome any difficulty.

How can matter tell a story?

Art does not have to "work." It is. It's not created, necessarily, for the public to decide whether it "works" or not.

They pray for inspiration. Some of them even have a muse.

I Had Been Meaning to Write

Stop the presses! I thought of a better word! Almost the right one!

In a Deer Stand

It's a question of time. Sooner or later, somebody will show up.

Translated from the Danish by Misha Hoekstra

There are people who are frightened by the very idea of being part of an audience.

All the days you have / ever breathed are swallows / shooting between trees.

To give oneself is a way to say one’s self can be gifted, like the hollowed-out horn.

For You I’ve Started Sleeping

if I loved you for your beauty? / there are worse reasons to love

That this is love’s profession, our scents / on pillows displace our alphabet to grass

But each plate obliterates the last / until I no longer mourn the destroyed plate.

And, although inaudible, still they are calling you.

Translated from the Hungarian by Erika Mihálycsa

When the Other Man Asked Him Did He Pray

All those miles down the boulevard, numbers counting down by twos.

The Last of Us Are Barely Here

Meeting Points: Between and In Between Subject and Object

The articulation of a word dissolves, and the most carefully strung together sentence falls apart.

She had never liked the dark and the feeling that anything could be in it.

This belief that luck was attainable.

Translated from the Chinese by Wendy Chen

I still don’t know how we had come to this.

Translated from the Greek by N. C. Germanacos

The world pivots around Main Street.

Journey Along the Sea Road

The human heart is more treacherous than these waters.

Translated from the Japanese by Meredith McKinney

The animals of the zodiac do not determine destiny.

Translated from the French by Elizabeth Zuba with Maria Gilissen

These are the original ceilings. They attract our eyes.