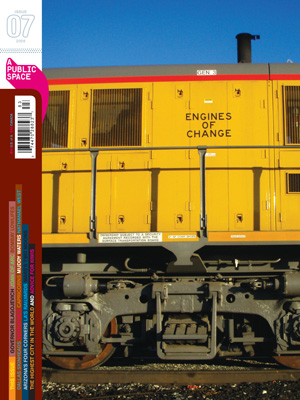 Lincoln in His Grave

When U.S. Attorney Patrick Fitzgerald said the other day that “Lincoln would roll over in his grave” if he knew what Governor Blago was up to, I had to scoff at Fitzgerald’s lame insight into Lincoln’s character.

A Valentine to Darwin

Dear Darwin, I have a crush on you.

This is how you visit the silver mines of Potosí, the highest city in the world: First, take an airplane to El Alto, where some peoples’ hearts collapse under the altitude as soon as they step off the plane.

Some years ago, before the big operations for heart and cancer that undermined him, long before he took his life, my great sad friend discovered the obsessive pleasures of fine clothing.

You Have to See This

When I was eight years old, my father returned from a walk and announced he had “found something.”

The outer office was much the same as she remembered it.

Sail On, My Little Honey Bee

There is an altitude above every planet where a moon can orbit forevermore.

A mixture of mother and kindly aunt, she invited the confidence of children throughout most of the South Island, and even from farther north in the foreign places beyond Cook Strait.

The Academy Award winning film editor and sound designer Walter Murch is known for his work on such films as The Godfather, Apocalypse Now, and The English Patient, but over the past decade he has also been at work translating the Italian writer Curzio Malaparte, who served in a voluntary brigade of Italians fighting alongside the French during World War I, and worked as a war correspondent during World War II.

Translation and adaptation by Walter Murch

Los Angeles has been called the City of Dreams; also the City of Angels; Jim Morrison called it the City of Lights, but to me it was just a city.

I've been taking pictures of Los Angeles and putting them online since May 7, 2007.

When I began to write, I didn’t know / each of my words would bit by bit remove / things from the world and in return leave blank / spaces.

Translated from the Polish by Mira Rosenthal

The silent south, the workers quiet.

Have I Forgotten Anything

I go out like a slogan / in the morning.

It is hard to be at the right funeral.

Thereafter it happened there would be no future / arrangements made

I called my house from a pay phone / down the street before I went home.

One cannot love more than one other / With the fierceness of the love one torn / Half has for another.

Anguilla, eel, sea-siren / That, making its way from those / Cold Baltic seas to get to ours, / Our estuaries, deltas, / And into our streams, and from / The profound beneath the river rises up, / Against the downstream impetus of flow, / Upstream from branch to branch and into ever / Smaller capillaries, seeking ever / Evermore to enter

Translated from the Italian by David Ferry

Awake or asleep the mind is aware.

According to the sixteenth century Indian poet Dhurjati, there was a king of Madurai who offered a thousand gold coins to anyone who could compose a poem that would be praised by the critics in his court.

Few names are more revered in the world of Urdu letters than that of Saadat Hasan Manto.

We met exactly two years ago today at Apollo Harbor.

When I left Delhi to return to Bombay, I was upset because it meant parting with good friends and a job my wife approved of—stable, easy work that netted us 250 rupees the first of each month. Nevertheless I was suddenly overcome by a desire to leave, and not even my wife’s crying and carrying on could dissuade me.

Dhundhu was outside the Iranian restaurant across from the small park near the Nagpada Police Station, and he was leaning against the electricity pole that he manned from sunset until four in the morning.

Variations on the Right to Remain Silent

Silence is as important as words in the practice and study of translation.