No schism occurs without a few pangs and regrets, of course. The animals had heretical ideas, but sometimes they seemed herer than we were. Maybe it was because bits and bytes flew over their heads. Maybe the animals were only ever going to listen to someone who spoke in moons and stars. Of course we never would have stooped to that, pandering to wallabies and penguins, handing out stars like handing out candy. If only there had been some river that could have washed all that magic off, all that moonshine, without washing them away as well.
—Amy Leach 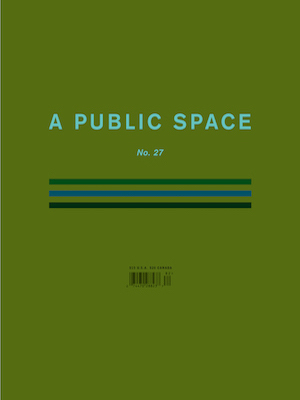 This is an issue of thinking about language, and its resilience.

I would have fallen in love with him too had not so many others done so already.

Now that our intelligence, having accelerated for centuries, has almost attained unimpeachability, we are not taking it lightly.

It was cruel, it was unspeakable, to allow innocence to mock itself this way.

The concept of civilization has acquired such popularity.

Maybe he should jump out of a plane. Does risk wake you up?

Remember longing / when it was legitimate, / remember writing / in an emerging language.

A Girl and Her Room

What kind of mischief are you up to?

So You Think I’m the Prometheus of the Literary World

I fashion my works from clay.

in dark / cold sleep, each branch a midnight / candelabrum of the cosmos.

Dear Millennium, On The Debt Of Love Among Strangers

Once I told you, love is a partial /anagram of solvency. Dear millennium, please— / I owe you nothing.

Could I / identify my mother by her hands? / Her feet?

Shoes of disappeared women / hovering in holes in walls

One might fail to notice / a hull amid the frozen waves.

The horse gallops / fog under its chin

Such is the silence / of a woman who speaks against silence.

History was mutable and distorted… Life had given him permission to play with it.

I always knowed I had some of my momma in me. All that hell. All that hardness.

They said never to trust an Indian who doesn’t want to go back to his own reservation.

There isn’t much to tell. Tell me anyway. Soothe this old heart.

Of all Edith Wharton's characters, Lily Bart is most her author's architectural id.

I’ve lost my taste for anything that isn’t made up.

Translated from the Japanese by David Boyd

Problems of an Empire

How important to designate even the most unimportant occurrence: What is nameless cannot exist.