"Everyone who is alive has a ghost inside them, don't they?" –Kelly Link's ​N​ew Boyfriend; ​Jamel Brinkley's Lucky Man; ​​fiction from Kathmandu by Prawin Adhikari; John Haskell remembers George Trow; Julia Cooke ​participates in​ the Parable Conference; ​​new fiction by​ ​Garth Greenwell​ and Anna Noyes​; poems by Maria d'Arezzo, Caroline Knox, Kevin Prufer, and others; and introducing Andrea Maturana. 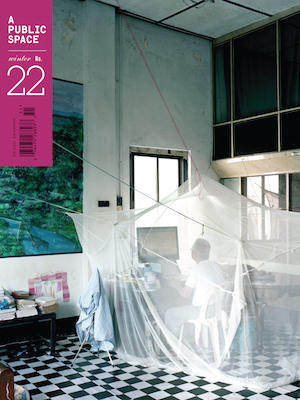 Fragments taken from the late fourteenth century masterpiece of medieval English mysticism, The Cloud of the Unknowing

She puts two fingers on his lips. She takes a breath and holds it, like she’s about to jump off a bridge into very deep water. Well, she is.

While Villagrán waited on the other side of the curtain for her to get undressed, he began to hope that there was something truly unusual wrong.

“Doesn’t it feel like I don’t weigh a thing,” I said, and he said, “Feels like I’m holding nothing at all.”

With any two people one would get the brunt of it, and time had hit him worse than any beating he'd ever seen in the ring.

A Man on the Grass

It would not surprise me to find I am dead— / as my soul is full of sweet things / I never found in life.

Translated from the Italian by Olivia E. Sears

Before we knew / what pleasure meant / we were multiplying, / going forth / into surrounding space / until all space / was pain.

Their job is to write the placecards, so at the head of the table / they are putting Gilbert Osmond, and honorably on his right / they seat Margot Macomber.

[A Sounding at the Ear]

Ripped from the earth like weeds / we clutch at our names, / we do not know how / this loneliness has found us.

Translated from the Italian by Charif Shanahan

In the Mansion of Supersonic Dreams

Tonight I stand under the shower’s blue stoplight / for nine hundred years. Tallying the centuries, / each number a chaser, surviving only until the next / pale digit takes its place.

Harbingers of the Deaths of Parrots

Perhaps the songs they sang for us / were not those we’d have wanted to hear, / but who among us can, with a clean conscience, / say of himself that what matters to him / is what others listen to.

Translated from the Polish by Benjamin Paloff

An empty all-white room with drapeless windows / as winter spills its math across the sills / where nothing suffers, that’s where / there’s nothing left to misremember / or forget.

I am not gigantic and I don’t keep my head down—like / the now-extinct elephant bird.

Because we were young / our picnic / Was hard-boiled eggs & black coffee in a flask.

The half-plastered ladies in tennis whites / at the taped-off perimeter / whispered among themselves, how sad.

The Art of Participation

To feel fully seen, period, is powerful; to feel seen by another person in something that calls itself a work of art is ever more so.

I remembered the certainty I had had, hours before, of my own competence, the pleasure I had taken in the solace I could give.

When someone much weaker than you confronts a brute much stronger than you and fights to the death in defense of an ideal, something gives inside: you become a bit of a coward.