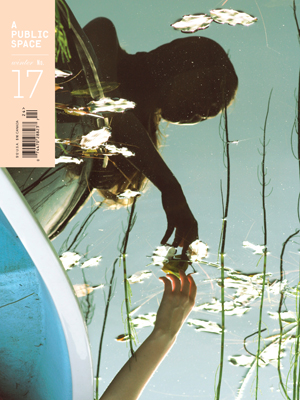 The story I’m in begins, not at the beginning because there is no beginning, but I remember sitting behind a desk.

It didn’t occur to me that I should miss / the sidewalks.

Not just because of my cold, cold heart, / pumping absolute zero in the glacial void / do I not know anyone truly

In Which the Pathetic Fallacy Wants to Even More

People who live in glass houses should install blinds.

From the Dictionary of the History of Ideas: Casuistry

In the Fetus Museum

You tiny Nero among peacock silks

A little mark shines between your fluttering eyelids.

Translated from the French by Dan Bellm

Fire / Wall and wall / -flower, you, a blossom of ice at the frontier

No one uses the running path / anymore

from my bed’s edge / I take a step / forward

Tiny mirrors released me into my mother’s palms

Translated from the Arabic by Fady Joudah

Aperture on a Virtual Field

I had the good luck to encounter Michelle Jaffé’s room-sized installation, Wappen Field, at the Bosi Contemporary gallery in New York early in August 2012.

Camilla—and the Rest of the Party

Translated from the Danish by Roger Greenwald

Misty and the Argonauts

At first the reading man sat at the bar.

We Are Holding Our Own

All that vanished time rattled around inside him like engine knock.

The Mausoleum of Lovers

I think that death, when it comes, is ardently desired by the body (abrupt spring shower), that it is just the respite from a fatal disgust.

Translated from the French by Nathanaël

Something in Us Wants to Be Saved

We opened the bottle and took a long sip before lying down on the grass and looking at the clouds:

Translated from the Spanish by Mara Faye Lethem