Politics and Pop: Brian T. Edwards on the making and censoring of art in Cairo; Antoine Wilson at Valhalla; Steve Powers's love letters; All the Best Stories Are True: a manifesto by David Shields; new fiction from T. C. Boyle, Danielle Evans, and Richard Powers; and poems by Derek Walcott, Idra Novey, Mary Jo Bang, and others. 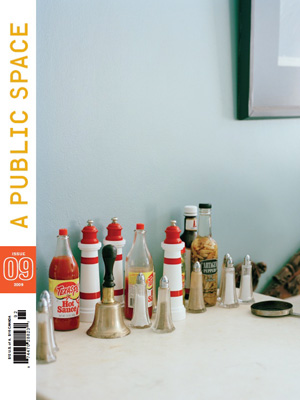 The Failure Bubble: It’s 1998 All Over Again

I hadn’t planned on publishing a novel about the consolations of failure just as the dot-com bubble was inflating and the startup money was beginning to scrub the city stupid block by block.

More Geese Than Swans: At Play in the Fields of Cinnabar

The American Legion’s club 432 holds a book sale every summer in the Veteran’s Memorial Hall in Cambria.

My father requested a witness cremation.

Of Strange Lands and People

A man rides backward in a packed subway car.

Someone Ought to Tell Her There’s Nowhere to Go

Georgie knew before he left that Lanae would be fucking Kenny by the time he got back to Virginia.

Love Letter is being painted from Forty-fifth Street to Sixty-third Street on the rooftops and walls of Market Street in West Philadelphia—fifty murals, created by Stephen Powers, who has done similar projects in Dublin and  Belfast.

Through God’s grace / the little drops came down, and the spectacle / of human science blabbered on, just waiting / for something to witness up close.

Both of them hide something, / That is why they move in such harmony.

Translated from the Slovenian by Brian Henry

A Equals All of a Sudden

At work one night / A truck driver had a truck / All of a sudden.

Stranger, I’ve locked the door / to our ocean room.

In the Barracks: A Found Poem

They had been in the country only for a few days when the hills began pricking into the barracks (which once had been university classrooms) with sniper fire.

Lullaby on the Marsh

What is needed is a recognizable molecule that carries the unstable / promise to the brain.

A Bird Loose in the House

The frame—a grid—contrives a theater, / The specter of narrative: / A shadow play  / Alive on a curtain alive with wind.

The Last Word is Emma’s

The moment the anglers  / pulled their net ashore / it broke, and when we / called you up, the line  / was engaged.

The boat left at eight a.m., and that wouldn’t have presented a problem, or not especially, if Damian hadn’t been in town.

Cairo 2010: After Kefaya—Brian T. Edwards Introduces the Next Generation

You are stuck in traffic in downtown Cairo.

I am the son of the generation who got the shock of multimedia in my face after university.

Translation from the Arabic and annotations by Brian T. Edwards with Amina Mohamed

Selma sat on the balcony of her father’s house reading Márquez’s Love in the Time of Cholera.

Translated from the Arabic by Paul Starkey

Hilal had two memories of his childhood he could never forget.

Translated from the Arabic by Adam Talib

Translated from the Arabic by Brian T. Edwards

Oh dark day…What are all these entangled relationships I find myself in, which each day get more entangled than the day before…

Translated from the Arabic by Brian T. Edwards

Morning... Like any filthy morning, people feeding off of other people...

When she’d been there alone with the cat and it had bit her playfully, a shudder had run through her body.

Translated from the Arabic by Humphrey Davies

All the Best Stories Are True

These are the facts, my friend, and I must have faith in them.