Share:
Read Tove Ditlevsen's Dependency with Dorthe Nors in the February edition of #APStogether, our series of virtual book clubs, free and open to all. Starting February 18, you can read Dorthe's daily posts, and comments from our fellow readers, on our Twitter and Instagram accounts. And join us for a virtual discussion at the end of the book club, on February 27—register here.

Tove Ditlevsen (1917-1976) is one of the most loved and yet also literarily scorned writers in Danish literary history. It isn’t until recent years that her brilliance has finally been acknowledged, and her memoirs, The Copenhagen Trilogy, containing the novels Childhood, Youth and Dependency, has—over forty years after her death—given her an international breakthrough. At last! As a Dane I’m honored that I get to read Dependency with APS Together readers, and as a writer I’m just thrilled to dive back into the amazing musicality of Tove’s poetic, humorous, and brutally honest writing.

(You might look at the first two volumes of the trilogy on your own before we embark on our Dependency—journey, but feel free to tag along either way.)

In Dependency we meet the twenty-year-old Tove who has just married a much older editor and writer. He is the gatekeeper to the Danish literary community, and Tove, coming from a poor working-class background, wants to be a writer and marrying him is a stepping-stone. She soon drifts into the arms of other men, lovers as well as psychiatric doctors. She divorces, remarries, divorces again and finally she finds a man/physician who might lack the ability to give her the loving connection that her entire life is a search for, but he gives her a substitute: the opioid Demerol.

The Danish title for the book is Gift. In Danish the word gift means both “married” and “poison.” It’s my favorite title for a book—and it is, on top of that, one of the best books ever written.

Tove Ditlevsen was born in 1917 in a working-class neighborhood in Copenhagen. Her first volume of poetry was published when she was in her early twenties and was followed by many more books, including the three-volume Copenhagen Trilogy. She died in 1976.

Dorthe Nors is the author of the story collections ​Wild Swims​ and ​Karate Chop​; four novels, including ​Mirror, Shoulder, Signal​, a finalist for the Man Booker International Prize; and two novellas, collected in ​So Much for That Winter​. She lives in Denmark.

February 27, 3:00 p.m.: A virtual discussion of Dependency with Dorthe Nors.

“I am always inside it, like in a picture.” A good writer knows how to open well. The first sentence in “Dependency” is superb. Tove places herself in marriage as a doll in a doll’s house. 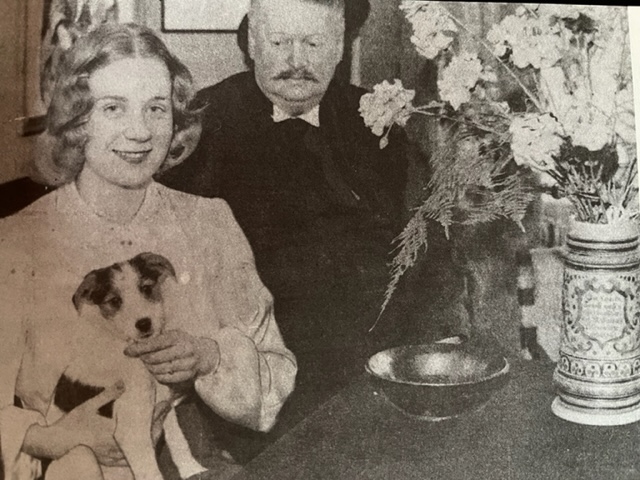 Dependency is autofiction, and in this photo you see the newlyweds: the young female poet & the gatekeeper. (Tove Ditlevsen and her first husband, Viggo F. Møller (and puppy). Photo credit: Gyldendal’s Archives.)

Tove is stuck between classes, and there’s a lot of resistance towards her "new class," and the intellectual boredom it contains, in this sentence: “I can’t spend my entire youth reading about the French Revolution.”

LOVE this sentence: “Piet is out the door again, so fast it’s as if he left through the wall.” It’s such a strong observation, so precise, and she’s basically describing “ghosting.”

Being from poor (poor!) working class, Tove strives to social climb. She places herself in marriage, motherhood, love like a child playing a game. And like a child, she ruins the game when bored.

The Eternal Triangle is also Tove caught painfully between society and true self, i.e.: Tove, the writer. She connects to the world in writing. The rest seems disconnected. (Photo credit: Nordfoto.) 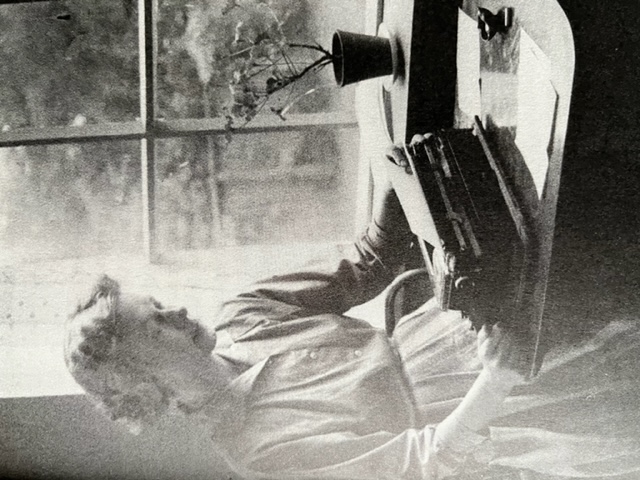 Her longing to be normal becomes a destructive life strategy: “Ebbe asks, Why do you want to be normal and regular? Everyone knows you’re not.”

A paradisal description of summer life with Ester Nagel up against the pain of dealing with the consequences of “life with a man”: the unwanted pregnancy. Again, notice how brutally honest she is, and full of rhythm and blues.

Here’s a photo of Tove and Ester from the summer without men. (Photo credit: Gyldendal’s Archives.) 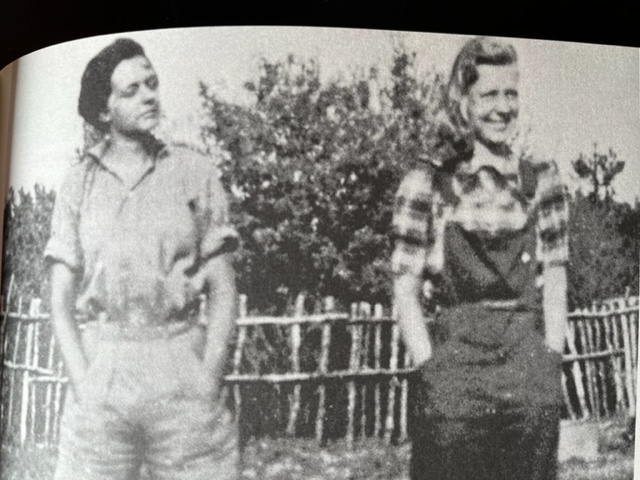 The woman in the doctor’s waiting room, pacing the floor, is like an omen, or a prefiguration, of the dependency that will emerge. First in pain, seconds later changed: “Her eyes are beaming.”

“Why is it so secretive and complicated? Why didn’t he just take it out? My insides are as quiet as a cathedral.” WOW! Please notice how the problem of “disconnection” runs through the novel: Tove wants to connect to the mother, the man, the child—but the only place she truly connects is in her writing.

There are beautiful descriptions of female friendships in this book: the way shared destiny and life circumstances unite women: “Within an hour it’s like we’ve known each other our whole lives.”

Here’s an iconic photo of the young Tove, and how the public saw the young poet from the outside: Beaming with beauty and youth. (Photo credit: Gyldendal Archives) 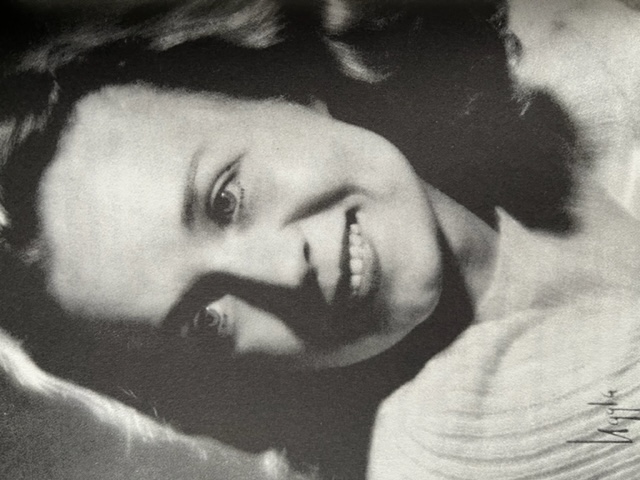 The horror unfolding around her is described with brutal honesty, and sardonic humor. I love this: “I wouldn’t recommend having any children with him. When he says that I realize that my period is a few days late.” Blunt! Not feeling sorry for herself!

Just as we didn’t think Carl could be described in more chilling ways, this sentence pierces us: “‘I love passive women,’ he said.” The scenes where he “takes her” when she’s high on demerol are unforgettable.

Carl’s “fuzz picking”? What a detail! We see the extreme consequences of the existential disconnectedness. The soulless monster feeds Tove connection (love) through a needle. The detachment spills into her children.

This photo is iconic: Looks lovely, but the disconnection is there. The house in the background is the one she lived in with Carl. Under the surface the social climbing has become a descent into hell. (Tove outside the villa with the kids. Credit: The Royal Library, CPH.) 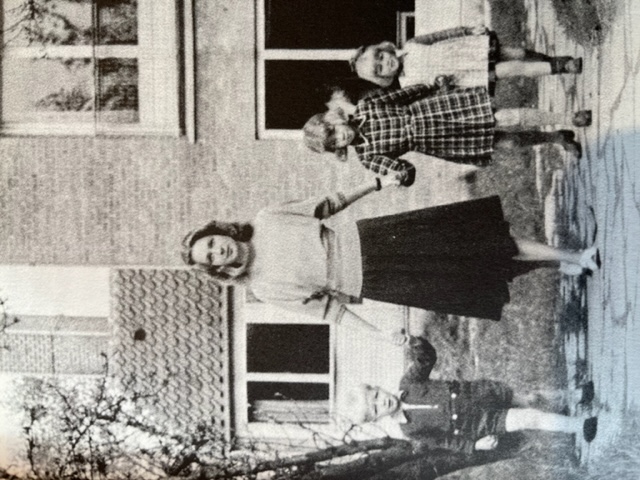 Freed from Carl she’s however still not freed from addiction. She’s also still addicted to men with a demonic vitality. Tove once said about her childhood dreams: “I wanted to be a widow and a writer.” She only succeeded in writing.

Tove was not treated very well by the male avantgardist, modernist literature movements in Denmark. But women loved reading her poetry, her stories, her novels: She described female life way ahead of her time.

I have this photo in my office. She took her own life in 1976, 58 years old. How I wish she had lived to experience the acknowledgement she gets wordwide right now. Here’s to you, Tove! (Tove with cigarette. Photo credit: Nordfoto.) 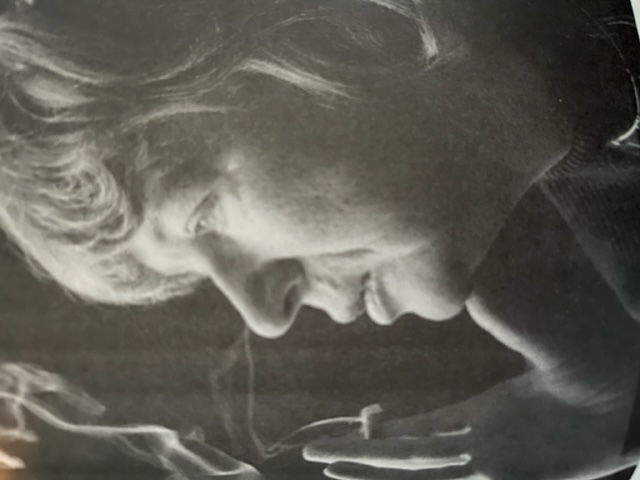 On “Columbo and Sugar Okawa” by Kiik Araki-Kawaguchi »