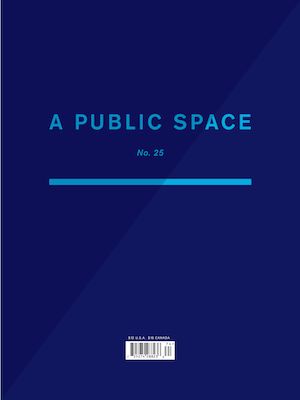 This is an issue exploring duels.

I therefore give you back your freedom as of September 1, 1959.

The Sinister Capabilities of Amiability

He was their fascination, danger, and distraction, a foretold scapegoat, a matter of time.

You can trust it a little, but only, as admitted, a little.

The first thing he wanted to do was to leave, no, it wasn’t—why are you lying to yourself, Costumier?

Rejoice! Our times are intolerable. Take courage, for the worst is a harbinger of the best.

Either/Or: Notes from a Difficult Year

Writing, as long as it is one’s private freedom, will always be disloyalty.

We are in obscene danger of becoming mass men (all right mass “people”) who will attempt to tear down anyone who is beyond us.

On the Direct and the Circular

How do two artists live together… and maintain our sanity and continue to work?

The streets were always so full of people running around all over the place, this way and that, shouting out "Free-dom! Free-dom!"

Translated from the Catalan by Scott Shanahan

What was the point of so much effort, single-minded devotion, celibacy and sacrifice?

Translated from the Catalan by Peter Bush

She says I’m always doing bad things, and maybe she’s right, but if I don’t do them I get bored.

Translated from the Catalan by Megan Berkobien

Cathedral of the Pines

There were too many of them in the small house, and the rain was constant that last day.

Sky and Light and Color

During this time I was enjoying the passage of days and waiting to see if there would be any money.

O you gorgeous torture, you slow-mo sadist, / you taught me all I knew about breathlessness.

Then They Ate Their Horses

How many men fit into this ditch / beside me? What color before were / my robes?

Someone will lose both eyes.

In my dreams I'm heading home.

Translated from the Russian by Andrew Wachtel

From A Winter Notebook

Winter—might pray to green trees / to see the star that brings a season in...

If I begin speaking to you now, you will have expectations

I'll be a sleuth rummaging through missing clues.

Someone with a clipboard / outside the market / asking for signatures

I can sometimes tell, / if you put two chemicals together, / what kind of third chemical you might get...

Do you realize the wealth of stones / God, in His infinite wisdom, has given to this township?

Because I have no language / for fire, I say longing.

The low light of the lobby spreads out like a day.

Even more than the streets, the harbor is liminal by definition: the tides only change.

The workers of the world (except at lunch hour and on the weekend and except parents and those who care for children) don’t sit in parks.

The tipi, for instance, understands plains life far differently than the barn.

Surface is not an independent element. It has thickness, and this thickness is both physical and metaphorical.

A List of Some of the Things Martin Knows

He saw the ice growing up from the dirt, the browning of the grass. The ascendance of the callous season.

We talked of grabbing the city, as if by its neck, and having it right here, right in the palms of our hands.

All that mattered then for a musafir from America was how he was going to go about killing another hot summer day.