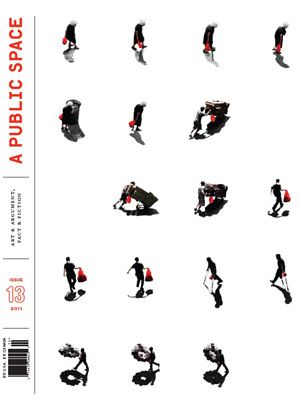 Never More Green: Amy Leach on the Sounds of a Weekend

Sunday Morning “You are the music. While the music lasts,” wrote T. S. Eliot, and while I am playing a song I believe the song. It’s more interesting to change with the music than to play sarcastically.

How I’d like to know everything that man knows, just not in the way he knows it.

The warning, as ever, is also a promise: This program contains subject matter and language that may be disturbing to some viewers.

Ekphrases: Bennett Sims on the Edge of Death

There is a famous photograph taken at the edge of death: inside a car parked by the sidewalk are all manner of large dogs, looking directly into the camera.

It's not like Grandmoms is urging me to steal from the British.

It was the shape of an arrowhead: sleek, sharp, fast.

Trees and the Bronx

Public art in New York, as in all vibrant cities, has a lot to do with spectacle.

Denise walked past her lover’s wife’s car each evening.

It needs to be said up front: I’m not a karaoke fan.

Translated from the Croatian by David Williams

In December 1943, 20-year-old Ena Takehíko was drafted into the Japanese imperial navy.

Translated from the French by John Ashbery

Streets seem abbreviated / by the heat, the ease of seeing.

Translated from the Polish by Clare Cavanagh

The life of the party slits its wrists.

You Who Are On Your Way Over There

You who are on your way over there / Toward what was once an azure blue dream, / My sun the closest shadow / to another’s shadow

Translated from the French by John Keene

The twilight landscape comes on  / and one channel of a thousand lights the window.

I dreamed of regicide though there is no king.

Several years ago the poet and translator Murat Nemet-Nejat approached me with an entertaining offer: take his translations of Orhan Veli, the great poet of modernism in Turkey, and make new poems out of them.

Translated by the Turkish by Murat Nemet-Nejat and Jordan Davis

Q do you know you’re a ghost

You play the buggies, too? I noticed you studying that racing form like it’s a rich uncle’s will. Yeah, I know that look, like it’s a chess game and you’re Bobby Fischer thinking so many moves ahead it’s like he can see the future. Tell you, there was a time I could close my eyes and pick a winner like I was following my finger around a Ouija board.

In The Use of Poetry and the Use of Criticism Eliot joked that the only pleasure he got from reading Shakespeare, when he was a boy, “was the pleasure of being commended for reading him; had I been a child of more independent mind I should have refused to read him at all.”