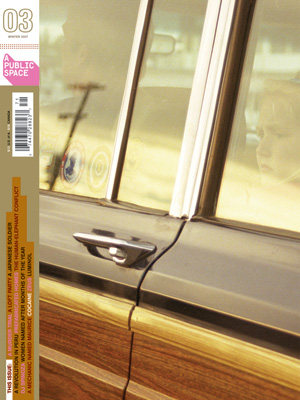 The wooden light board, with ground glass, that I bought from Pat Smith is an interesting antique, but I don’t know what I’m going to do with the sink.

Let me begin by telling you how I learned that I sleep with my mouth open.

A Wolf That Knows Enough to Keep Its Distance

Night is a wolf that knows enough to keep its distance. —Robert Kelly

I’d been sitting there in the courtroom all day, looking at the back of people’s heads, mostly Andy Munson’s.

I once worked in the word-processing pool of a large, unremarkable business.

The first chords, chunks of noise, rebound in the gulch of buildings.

The life of Hiro Onoda, soldier.

How everyone thinks him a happy-go-lucky guy.

In a universe renowned for its simplicity / Composed, as it was, of P and –P / There lived a philosopher who became a painter

An aching young / man on the street / approaches, stops / me with his eyes / and saying Sir?

I asked him about the old days / when we were still so young / naive, hot-headed, silly, green.

We did not have the benefit of a guide, / no crone to lead us off the common path, / no ancient to point the way with a staff

The Emperor’s Journey to Shu

Room for all our sons.

He was a poet who worked with intricate forms—villanelles and pantoums—but during our month together he spoke quite simply.

In 1980, there were many reasons to be optimistic about the future of Peru, most significantly, the restoration of democracy after twelve years of military dictatorship.

To Burn the City

On shelves and in drawers, in trunks and boxes, my grandmother hid the artifacts of her old house

The Complicity of Silence

Many Peruvian authors, critics, and readers are of the opinion that there is no common literary project uniting young Peruvian writers.

Photos from the Land of Light (País De Luz)

In 1986, Thomas J. Müller and Helga Müller-Hebron proposed a series of photography workshops through the School of Science and Communication Arts at Catholic University in Peru for campesinos and residents of the marginal neighborhoods springing up on the outskirts of the cities.

Interviewed by Juan Manuel Chávez and translated by Ezra Fitz, with Samantha Cohen and Humberto Sanchez

The House on El Pino Hill

The curtains are half closed over the small, barred window.

In the Belly of the Night

Ubilluz’s boots sunk into the mud with a dull thud that neither of them paid any attention to.

Everything is Illuminated: My Love Affair with CSI

Forget its telegenic cast: the real star of CSI is Luminol.