Belonging and excluded, borders and crossings, the solid and the porous. From evening to day, imagined to real. The populous and the particular. This is an issue about dualities. Inside and outside, and the interstitial between. 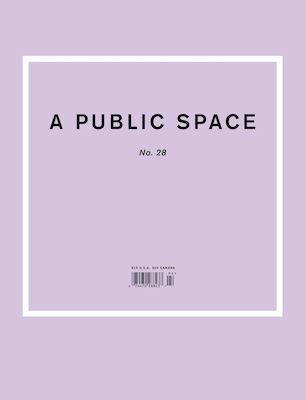 This is an issue about dualities. Inside and outside, and the interstitial between.

A Llama in Times Square

It was time at last for a full renunciation of the way I had been living, fast then slow, the blood and brain, the inner dynamo.

Listen: something has happened.

Translated from the Chinese by Fiona Sze-Lorrain.

The wind is directionless, confusing the trees, loosening siding and tiles. Creatures of flight have put themselves away.

When you wake up / keep quiet / find ecstasy.

I didn’t know if I could live in a world that seemed to me now like the essence of shark. That vicious unlit eye.

I set out upon a normal investigation and found that invention required all the same components.

There stands this person who is also a talisman.

In a Bucharest Journal

Read it, imagine / me listening without trying.

That to Philosophize is to Learn to Die

This is just a trick: a ship breaks in half then sinks.

The Stars Down to Earth

Translated from the Portuguese by Julia Powers

Home is a Foreign Place

Nobody told us our voices were wrong.

The best kind of property is shared, designed to benefit widely, and without bounds.

You came here to feel comfortable? To talk about the weather?

There were no borders or boundaries, just differences in taste from one house to the next. I was going from taste to taste, and that was all.

When the book came, everything changed.

We could hear the morning rush-hour traffic thundering above us, oblivious.

Someday we will better understand what has happened to make all things change in such a small space of time.

The Monkey in the Whirlpool

That was the end of the dream. And then the man covered his face and began to cry, because he was reminded of his dead father, who once told him he had a gift.