Mattie meets Rooster: “They tell me you are a man with true grit.”

Q: Did the expression precede the book? Even if it didn’t, surely the book and its first movie adaptation etched it into our cultural phrasebook. Cf. this NY Daily News front page from last week (via @rebeccabengal): 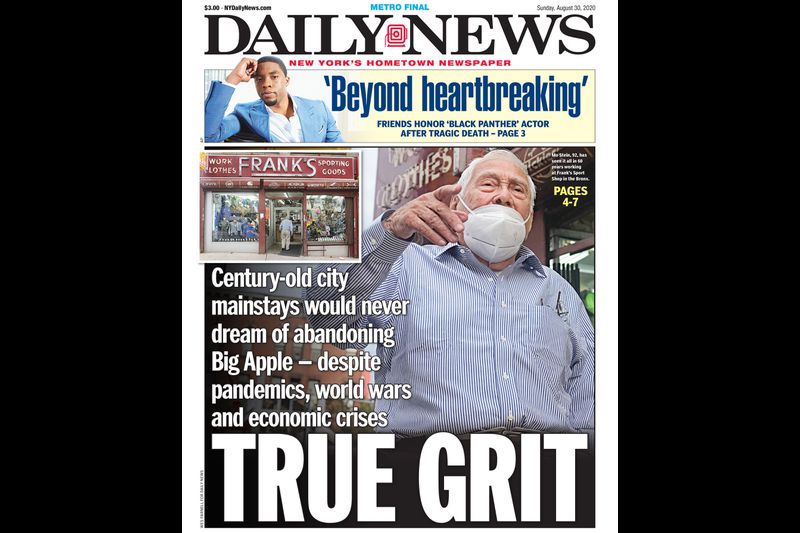 ​​A delicate moment—so tender and awkwardly seductive—as Mattie rolls a smoke for Rooster. “Your makings are too dry.” He replies: “Something.” (!)

​​​​“I mean business.” Literally: M. wants to nail down an agreement for hunting down Chaney. She has the numbers all worked out. The hashing out of deal points and the (ongoing) formulation of a plan are weirdly mesmerizing.

​​​Rooster suggests they talk and “make medicine”​​—a pet phrase for R., along with “I miss my guess.”

​​Rooster “did not have a wife.” M. visits his slovenly lodgings at Chen Lee’s grocery. M. mentions Chen’s refined nature even while referring to him as a “Chinaman.”

​​​The term makes me raise an eyebrow for sure—though perversely I like seeing an Asian character in nineteenth-century Arkansas. Portis gives us a past that’s not all white.

​​More racial tropes in store at the store: the cat’s name is General Sterling Price, after the losing Confederate leader at the Battle of Elkhorn Tavern (mentioned earlier).

“I don’t see how you can play cards and drink whiskey and think about this detective business all at the same time.” Detective business—this book does have a foot in the hardboiled tradition.​

A drunken Rooster serves a “rat writ” and blows away a rodent. An echo of the “writ of replevin” Mattie brandished earlier over Stonehill. A great opening into Rooster’s character—his contempt for “pettifogging lawyers,” the grief he feels for his fallen partner Potter.​

Portis knows his guns. R. offers to trade a “twenty-two pepper box” nicknamed the Ladies’ Companion for M.’s unwieldy Colt’s Dragoon. Turns (as things do in Portisland) into a bonkers anecdote about someone named Big Faye.

Another gentle hit of pure comedy as Mattie reads a romance story to Grandma Turner. (I like that they get along even though G.T. steals the sheets.) Contrast the heroine’s Rich People Problems vs. Mattie’s situation.

If you like this aspect of Portis’s humor, his novels The Dog of the South and Masters of Atlantis Portis take it to even more absurd heights.

Portis can include such oddball bits in True Grit and get away with it because the central motivation (revenge) is so strong—we need the comic asides as a distraction from the intensity of her quest.

“Bess married one of the two beaus and he turned out to be mean and thoughtless. I forget which one it was.” Perfect.

Now we meet our third major character—LaBoeuf, the Texas Ranger with the cowlick, fancy guns like “you might see today in a ‘Wild West’ show,” smug grin that makes Mattie a little weak in the knees despite herself.

When the Ft. Smith sheriff earlier misnamed Chaney as “Chambers,” M. took it as a sign of his delinquency. Now she discovers that his name is actually Chelmsford, and La Boeuf has been on his trail for a crime in Texas.

The debate between M. and L. about Chelmsford’s fate is brilliant—like the Stonehill convo in a different key. LaBoeuf’s professional, financial, and territorial motives come head to head with Mattie’s purely filial one.

“Would not a hanging in Texas serve as well as a hanging in Arkansas?” “I want Chaney [sic] to pay for killing my father and not some Texas bird dog.” It doesn’t end well.