Home / APS Together / The Maytrees by Annie Dillard | Day 12

The Maytrees by Annie Dillard Day 12

Deary, with her yellow & blue hands, her jewelry, her Harris tweed, is the most physically vivid character in the book. She is a Love Object. —Elizabeth

This triptych of sentences, the question in the middle, the flanking phrases with their semicolons, wrecks me. —Elizabeth

“It was that chrome winter day’s last light; the smoke of sea-frost blurred the horizon. Did Deary eat? Barely; applesauce.”

“She had expensive new teeth and looked like Burt Lancaster.” Never forget that Annie Dillard is laugh-out-loud funny. —Elizabeth

And of course, as with the death of Deary, she juggles the numinous & the workaday world, the ordinary & the idiosyncratic, like nobody else. I rarely cry while reading fiction but this does it for me. —Elizabeth

The reason, probably, why Maytree doesn’t want Pete to go to sea. The specter of the Peaked Hill Bars shows up early in the book, but in Lou’s POV. —Elizabeth

“Damn, he thought—not that he would watch his neighbors drown, but that it was part of life.”

Lou is a quiet person; Maytree continually sees her silence as a receptacle, not a bulwark. —Elizabeth

“Still in her twenties, she spoke three languages and held her tongue in all of them.”

“They found mouse poops like jimmies and nests of shredded newspaper.” 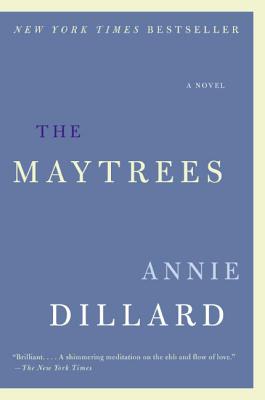