Home / APS Together / So Long, See You Tomorrow by William Maxwell | Day 5

Side characters enter, exit. Close eye on the difficulties of tenant farming and the full scope and possibilities of 3rd person now kicking in.

Female characters are described in detail but generally (though not always) have less interiority; the deep internal fullness of the book lives more in the boys and the men.

Lloyd’s sudden opening to love of Fern seems to descend on him, not unlike the way the mother’s death falls on the narrator’s family—these uncontrollable things in our lives… “a change in him so unexpected”

The animals continue to show awareness of their human companions—the horse, the dog, now “the cows sensed that he hardly knew what he was doing…”

The close third person on Lloyd humanizes him, his weeping quietly in bed at his rebirth, a joy he was not aware he was capable of—Giacometti’s quote on the sublime rumbling beneath.

And the friendship crumbling—“As if Clarence had met with an accident”; I’m thinking of the smaller friendship of narrator and Cletus and that small betrayal up against this large one. (Charles Baxter’s essay on rhyming actions). 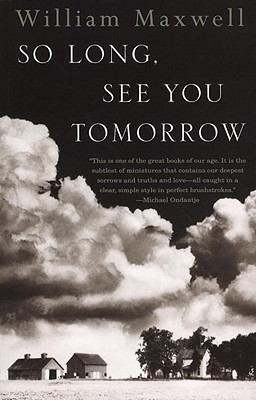