Home  »  News  » A Public Space | The Brothers Grimm Sign in

A Public Space | The Brothers Grimm

Share:
Read The Grimm Reader: The Classic Tales of the Brothers Grimm with Yiyun Li in the ninth installment of #APStogether, our series of virtual book clubs. Details about how #APStogether works can be found here.

In 1806, the Napoleonic armies invaded Hesse-Cassel, where Jacob and Wilhelm, the Brothers Grimm were researching for their folk-tale projects in their spare time. Speaking of the turmoil of the time, Wilhelm wrote: “Those days of the collapse of all existing establishments will remain forever before my eyes…. Undoubtedly, the world situation and the necessity to draw into the peacefulness of scholarship contributed to the reawakening of the long-forgotten literature; but not only did we seek something of consolation in the past, our hope, naturally, was that this course of ours would contribute something to the return of a better day.”

This fall, as history presents uncertainty and turmoil in more than one form, we invite you to read tales from the Brothers Grimm with A Public Space and Yiyun Li, not merely for consolation, but for the hope of the return of a better day.

You can purchase your copy through our bookstore partners, Seminary Co-Op in Chicago and Loyalty Bookstore in Washington, DC.

Day 2|October 30: The Wolf and the Seven Little Goats. The Twelve Brothers. The Hand with the Knife.

Day 3|October 31: Little Brother and Little Sister. How Children Played Butcher with Each Other.

Day 6|November 3: The Bremen Town Musicians. The Devil and His Three Golden Hairs. The Children Living in a Time of Famine.

Day 7|November 4: The Magic Table, The Gold Donkey, and the Club in the Sack. The Elves. The Stubborn Child.

Day 12|November 9: A Fairy Tale about a Boy Who Left Home to Learn about Fear. The Worn-out Dancing Shoes. Snow White and Rose Red.

"I have decided to marry my daughter, for she is the living image of my dead wife, and I shall never find another bride like her." Furrypelts
A statement like a kaleidoscope–one doesn't know what to say, except one doesn't want to spin it too much.

"The Singing, Soaring Lark" may be my favorite from Grimms so far, with all the complications of relationships: parent & child, in-laws, husband & wife, wife & mistress. There's no villain but people whose lives are changed by what they reasonably want.

Two things learned from "The Goose Girl":
1. Knacker: a buyer of worn-out domestic animals or their carcasses for use as animal food or fertilizer
2. Falada (spoken, in Portuguese) the horse loses his life not because he has spoken, but he can speak.

"What happened to the poor fox? Many years later, the prince was walking in the forest and met the fox." The Golden Bird
What a fox. It doesn't often happen that a fox gets an honorable role in a tale.

"My mother, she slew me,
My father, he ate me,
My sister, Marlene,
Gathered my bones,
Tied them in silk, for the juniper tree.
Tweet, tweet, what a fine bird am I."
The Juniper Tree
Is there a more literal and literary tweeter than this boy?

"She set to work gathering all the body parts and put them back where they belonged: heads, torsos, arms, and legs." Fitcher's Bird.
Fairytale at its most hopeful: life and death are only the two sides of a reversible jacket.

"They forced her to drink some wine, one white, one red, one yellow, and before long her heart burst into two." The Robber Bridegroom
The atrocities of the robbers aside, their heartbreaking recipe is intriguing: mix all three, it's an orange wine.

"Here you can see the candles that are the light of human lives...Sometimes even children and young people only have small candles." Godfather Death
Sometimes a nightingale can have a chest cold, a dolphin a toothache; sometimes a fairytale is just sad.

"The mother went over to the child's bed and discovered that he had died. But he looked peaceful. And the rose was in full bloom that morning." The Rose One must believe that some roses bloom without taking away a child's life. Some roses simply bloom.

Day 7 | November 4
The Magic Table, The Gold Donkey, and the Club in the Sack. The Elves. The Stubborn Child.

“It was plain to see that this animal understood nothing about the art of minting, for not every ass can make money.” The Magic Table, the Gold Donkey, and the Club in the Sack
One feels for the donkeys who have not mastered the art of minting.

“The little arm kept reaching out of the grave. Finally, his mother had to...strike the little arm with a switch. After she did that, the arm withdrew, and the child finally began to rest in peace beneath the earth.” The Stubborn Child
Peace? PEACE???

Day 6 | November 3
The Bremen Town Musicians. The Devil and His Three Golden Hairs. The Children Living in a Time of Famine.

"The devil wasn't home, but his grandmother was sitting there in a great big easy chair." The Devil and His Three Golden Hairs
We don't know who devil's parents were, but it's a bit comforting to meet devil's grandmother.

Annotation of The Evil Mother-in-Law, from Montaigne: “And that man of old who, throwing a stone at a dog, hit and killed his mother-in-law, had he not reason to pronounce this verse: ‘Fortune has more judgement than we.’”

"Amid the thickest darkness of World War I, a luminous beacon of the magical inside the macabre." Another trove of Grimm illustrations.
https://www.brainpickings.org/2016/02/29/arthur-rackham-brothers-grimm/

“Thank goodness that we tailors are fleet-footed.” The Brave Little Tailor
Once upon a time, before any kingdom existed, there lived a diminutive fleet-footed tyrannosauroid. This human-sized dinosaur— ~4ft limb length and 170lb mass—lived as a happy elf among the colossal tyrannosauruses, for as long as they lasted.

Hans Dumm: how many marriages in fairytale history were arranged lemons? Here's "The Three Lemons"–another lemon story, in which a sultan's son looked for a wife in the lemons.
https://digital.library.upenn.edu/women/gask/tales/LEMONS.html

A good place to read tales from around the world. https://digital.library.upenn.edu/women/gask/tales/tales.html

Day 3 | October 31
Little Brother and Little Sister. How Children Played Butcher with Each Other.

Once upon a time, in a communist country, a soldier shot an actor mid-scene, who played an evil landlord on stage. I heard the tale of the shooting when I was four. I loved singing the lead song from that opera, which was called “The White-haired Maiden.”

"It's time for us to leave home and seek our fortune out in the world.' "If I don't go, I'll die of grief." These lines, spoken by the little brother and little sister, have been spoken by thousands of brave children. Their parents, braver. 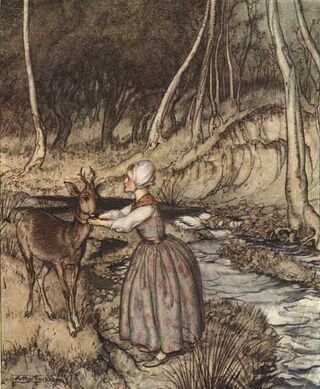 Tolstoy, after War and Peace and Anna Karenina, wrote a collection of tales for children. 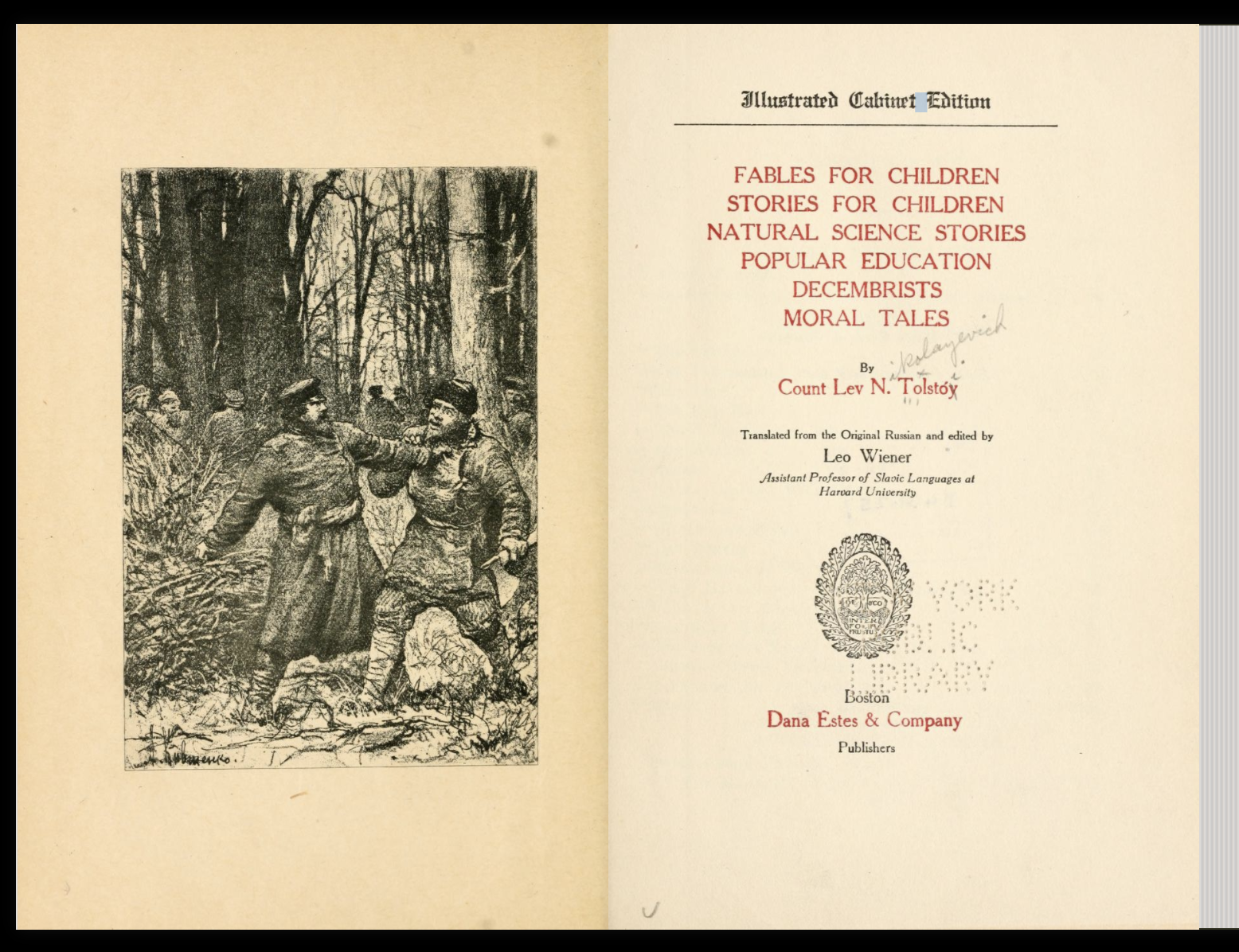 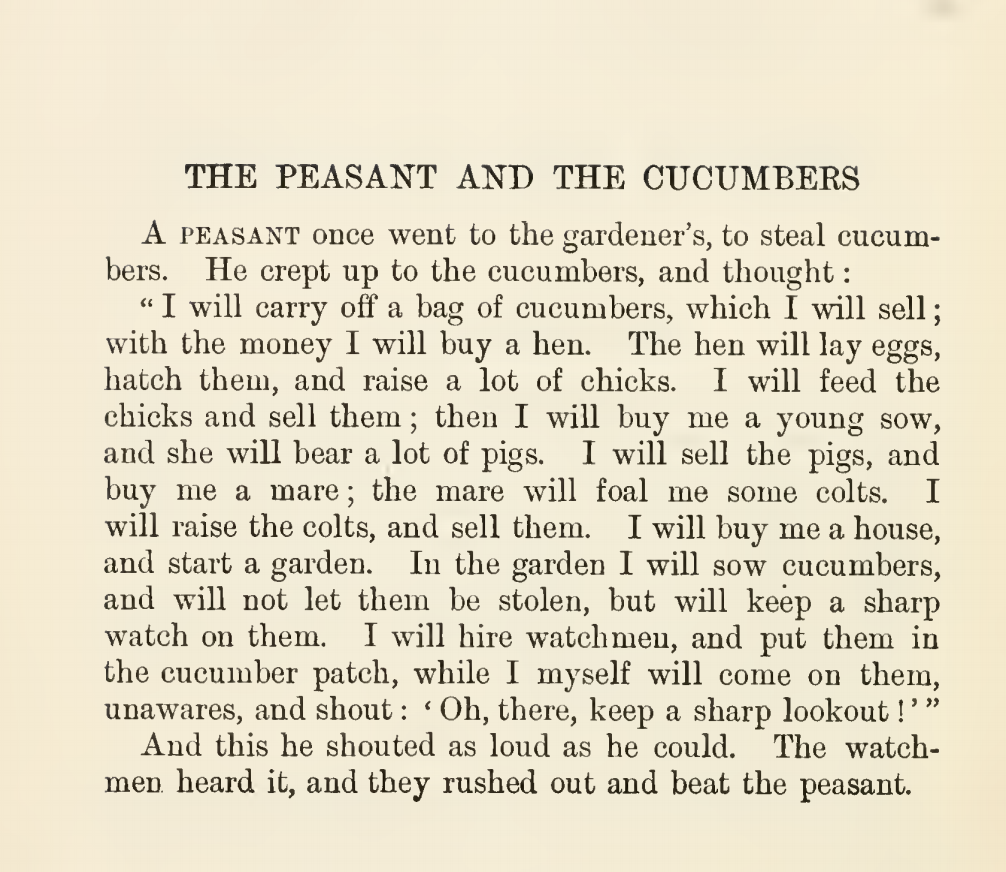 Day 2 | October 30
The Wolf and the Seven Little Goats. The Twelve Brothers. The Hand with the Knife.

"The wolf went to the store and bought a big piece of chalk. He ate it up so that it would make his voice softer." The Wolf and the Seven Little Goats
Voice-softening chalk and COVID-killing bleach: some inventions are...(what is the adjective here?)

A trove of Grimm illustrations
https://www.brainpickings.org/2015/07/20/best-brothers-grimm-illustrations/

A modern variation of a Grimm tale––Patricia Highsmith's story "Hamsters vs. Websters," in which several generations of hamsters help a princeling kill his father, who is the opposite of an evil king.

“Once upon a time, when wishes still came true…” The Frog King, or Iron Heinrich
Once upon a time, wishes were coins, with one side saying: will come true. Later, wishes came in the shape of dice, some with six sides, some ten, some sixty. Nowadays wishes are marble balls. Rolled, with wishful thinking.

Elizabeth Bowen, celebrating the centenary of the Brothers Grimm, wrote for NYT Magazine in 1963: "These are tales for all ages. They are tales for all...Here the extraordinary is the beautiful. Why not? Should beauty ever grow ordinary, what a sad affair!"

"This is a grown-up book for grown-up people who haven't forgotten being childhood readers"–A.S. Byatt on Enchanted Hunters: The Power of Stories in Childhood by Maria Tatar, whose translation of the Brothers Grimm we are reading for.
https://www.theguardian.com/books/2009/nov/07/enchanted-stories-byatt-book-review

« A celebration of the 2020 Writing Fellows

“At peace in the dark where writers work.” »