G.  R. Swenson protests MOMA with a ? / Pita Amor in neon lights / Fame and Rejection / Saul Bellow’s letters from a safe-deposit box / Looking for Natalie de Blois on Park Avenue / The last years of Black Mountain College / Elena Ferrante and the art of concealment / Merce Cunningham dances / On the life of studios / The architecture of freedom 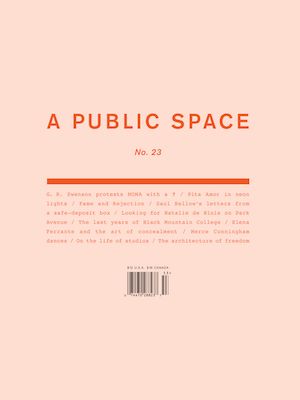 I’m moody, damn it, and restless… and life has so many tuneless days.

The Book of Petitions

Who will find lost time / who will tie it to the foot of the bed.

An out-of-print book discovered in the one dollar cart at a used bookstore leads to the rediscovery of an acclaimed writer, her unpublished work, and a forty year correspondence with Saul Bellow in a safe-deposit box in Tulsa, Oklahoma.

At last it had dawned on me that these obstacles were my life. I was always rolling these stones from my grave.

A Life in Letters

Thirty-one, a single mother of two young sons, she labored at her typewriter day and night, worked part time as a librarian and an editor for the University of Chicago Press, and often threw bills directly into the trash.

I was wondering what the chances might be of undertaking a crash course in self-improvement here in Eternity. Not so hot.

Edna is no American Bovary. She is American—period. The American heroine on her quest for experience, in all her problematic American innocence and ignorance.

One should cook and eat one’s misery. Chain it like a dog. Harness it like Niagara Falls to generate light and supply voltage for electric chairs.

And yet I found myself reacting to her in the same way—noticing all through the meal that she seemed to talk only when her mouth was full and her cheek was bulging like a fist. As if she were chewing a quid of tobacco, and about to squirt. Alarming.

I let myself be carried by my language as if it were endowed with tiny wings.

You listen to the wind's instructions, its steady siege.

Sin pricks me like a convict’s suit of arrows / For here my evil, blue, and moody youth / Has found its old lair.

We have thrown ourselves into the cause, body and soul.

Cannot we create a new world by emptying this one out and adding fresh colors one by one?

It was absolutely revolutionary and liberating, and so full of possible experiment.

Pita in the Arms of God

I believe in the time of my glands and arteries.

The “nothing” I am talking about is a perfectly successful cocktail of darkness and fog.

Never in the course of history has a work of art disposed of itself. A strange suicide indeed.

Baz and I had Fame and Rejection. We lived in a flow of contradiction.

I peeled every trace of light off the walls. Withdrew into blurred definitions.

A Body in a Station