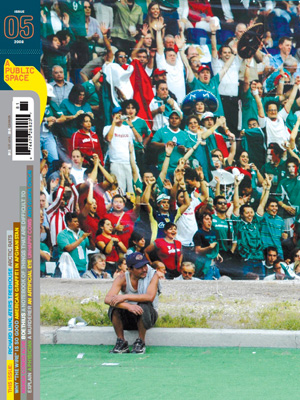 Just after the first Gulf War, I moved to Jeddah with my husband.

The story goes that as a child my mother finished a book every day.

Off the Pages and Onto the Sidewalk

Ten p.m. in Shimokitazawa, a neighborhood of circuitous alleyways ten minutes or so west of central Tokyo by train.

The Revenge of the Angry Black Artist

Years ago, when I was a Disney Screenwriting Fellow (a program that evolved out of the need for Disney never again to be dead last in employing women and writers of color, probably more out of corporate embarrassment than enlightened self interest), I had the thankless task, they didn’t even own the rights, of adapting Ralph Ellison’s Invisible Man.

If I am to explain how, because of my father, I became the person I am, I must begin with the story of my father, with the man who had a determining influence on my youth.

Translated from the German by Joel Rotenberg

These long white days / Have gone by with no recording.

The Detour Across the Delaware

Inebriating. We’re inebriating. Seasons are / clay windows, we climb through them / all radiant.

Dear Darkness—consider this / my last attempt / to reach you.

The Ghost of Edna Lieberman

They visit you in the darkest hour / all of your lost loves.

Translated from the Spanish by Laura Healy

Renunciation / is an evolved form / of desire

I packed up the books

It’s five o’clock, we’re walking in the sun / Down an over-wide, under-ridden road

The Virtues of Birds

Two birds came upon a crust of bread lying on the path through the woods.

With output of twenty-seven hundred envelopes an hour where prior but three thousand were made a day, cry when you consider the empty envelopes piled on each of our desks

The two women appeared in Conrad’s office late one afternoon in March.

Field Notes from a Treehouse

"Do not worry if you have built castles in the air . . . that is where they should be . . . now put the foundations under them . . ." —Henry David Thoreau

Door in Your Eye

That first evening in my new city, I had a phone call from my father, wanting to know how I was getting on.

It’s easier driving through the country, especially when you doing a cattle haul.

There is a tiny Southerner inside me.

Heads Up: Military Graffiti in Kuwait and Afghanistsan

Last July, I was stranded for a week at Camp Ali Al Salem, a U.S. military base in Kuwait.

Lessons for a Dead Hare

In one of the texts in The Notebook of Things that Are Difficult to Explain, the blind poet speaks of a certain event that took place in an institution known as the Last Citadel.

Translated from the Spanish by Daniel Alarcón

Morphology of the Hit

We begin with the first function.

“All his life Peter was afraid of flying,” Sally Goodrich said.