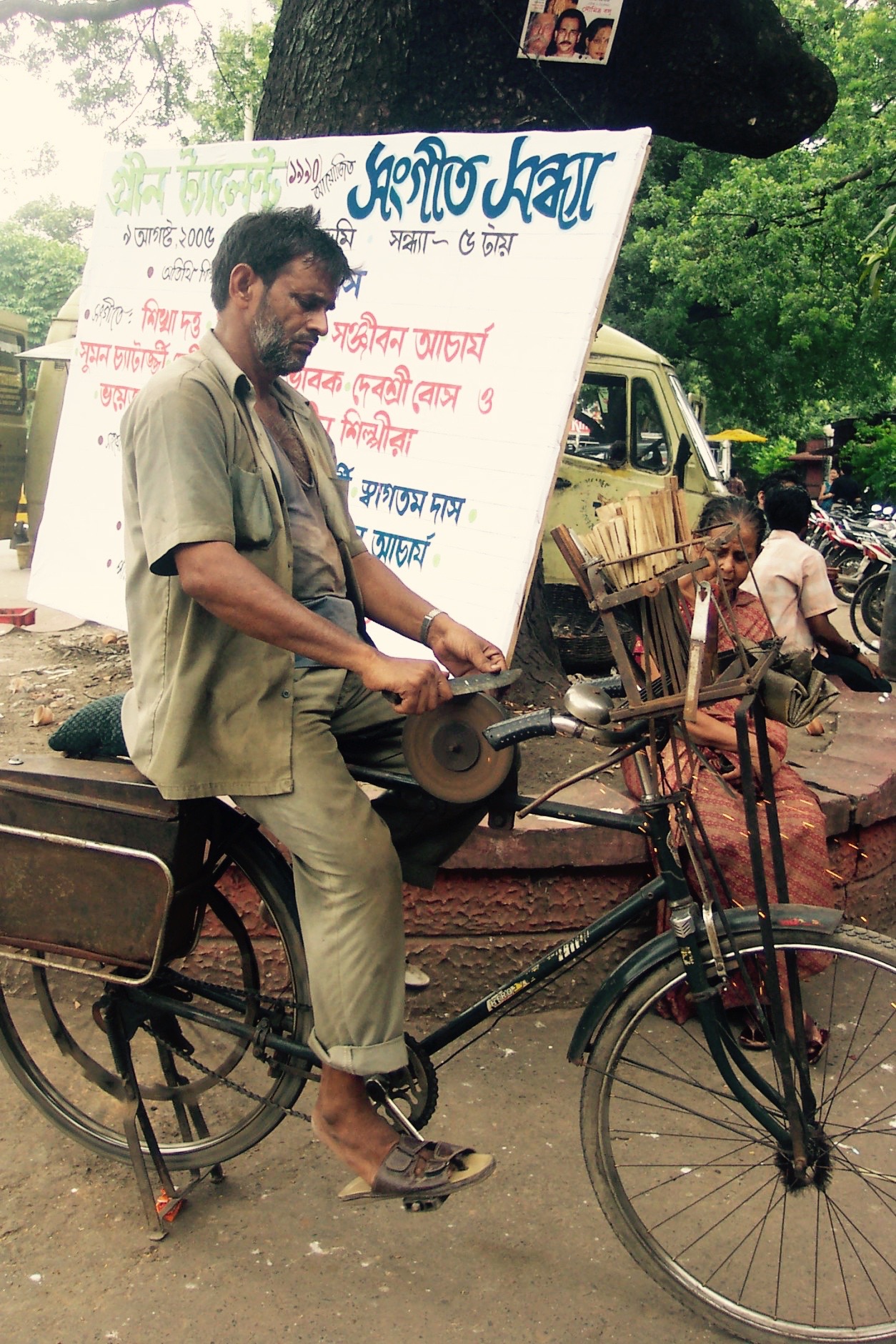 Blade sharpening, key fixing, paper collecting, zipper straightening—all have their own calls in this neighborhood. When I see the weariness of his face I think fatigues is indeed the right term for his uniform. But in this weariness you must be alert, a single misstep means a cut or worse. The lady next to him is weaving brooms. The banyan is shaped like the neck and head of a giraffe. The sharpener’s body is partly blocking the sign for a concert of semi-classical music, which will (NOT) start promptly at six. These days even half a crowd is decent. I’m sure it’s affected the sharpener’s business.
—Travel journal, Kolkata, India, 2010

Whenever I visit Kolkata, India, the city of my birth, nostalgia follows me through the streets. I notice which of the older buildings have become new malls, which of the sweet shops known for their condensed milk squares have now been replaced by modern confectionaries or worse, a Baskin-Robbins, which of the old cow-claimed roads have been cleared to make room for apartments. My travel journals are full of these observations and the memories that come with them.

I took the picture of the blade sharpener in front of the Nandan Theater and Musical Hall in central Kolkata. I had a short conversation with him and asked if I might photograph his work. He seemed indifferent to the request. At least a week later, maybe more, while reviewing the photographs on my camera, I wrote about him in my travel journal. At that point, the experience was already removed from the immediate and the visceral. Whether consciously or not, I would dramatize the event; nostalgia had already set in.

Some of these feelings of homesickness while in my home city are warranted, maybe even useful. The theater we were attending that night was staging a production of a twentieth-century Bengali play. The audience outnumbered the actors, but barely. Seats groaned, as did the many soft spots on the stage. At the end of the play, one of the actors broke the fourth wall—he solicited the audience to return for another show, and asked that we continue to support local theater. It’s difficult to translate his sentiment to those growing up in Kolkata today, with their multiplex cinemas, King Kong, and CGI dinosaurs. Besides, there are Bollywood films on multimillion dollar budgets. There are the offerings of technology, each one vying for attention.

Some of this nostalgia can feel like, and surely is, the romanticizing of a child-immigrant returning home as an adult. The multiplex brings jobs, as does the Internet and the Silicon Valleys in the south of the country. Shouldn’t the new generation have a chance to rewrite their story? Even so, sometimes I want the city to remain as I remember it. I want the theaters to run house-full and the blade sharpener to be busy with work on his old corner.

In my story, “A Small Sacrifice for an Enormous Happiness,” the protagonist Nikhil also struggles with the changes the city is undergoing. He bemoans the ways in which cultural traditions have eroded, yet, by these same standards, as a gay man in 1980, he’s unable to pursue the love of his life without resorting to subterfuge. The city’s attitudes towards sexuality don’t serve Nikhil, but he doesn’t support the dissolution of a classist, segregated state, either.

Parts of Nikhil’s character may have come from my reviewing of travel journals or the photographs that accompanied them. Certainly, the house in which he lives shares a likeness to my own paternal home, where, returning each summer, I would document the changes each year. In such an old house, small objects assume importance. The configuration of a room begins to tell its own story. A Marconi radio replaced by a black and white television, or the withering of a verandah, or the last pane of stained glass removed from the foyer window. Chronicling these changes has been a way of sustaining a connection to my past, a connection that is essential to my writing.

Jai Chakrabarti is a 2015 A Public Space Emerging Writer Fellow. He graduated from the Brooklyn College Fiction MFA program in 2013, where his short fiction won both a Ross Feld Award and a Himan Brown Award. His previous work has appeared in journals such as Hayden’s Ferry Review, The Coffin Factory, and the India-based English-language newspaper The Statesman.